While some surveys also show that a smaller majority of GOP voters back ending cannabis prohibition, Republican lawmakers in Congress had blocked marijuana amendments from even being considered over the course of the past several years during their House majority.

Last week, top Republicans on the Financial Services Committee requested that Waters delay the vote on the banking legislation, writing in a letter that they had several “unanswered questions” about the measure.

“Some on my side support the measure as written. Many oppose it,” Rep. Patrick McHenry (R-NC), the panel’s top Republican, said in his opening remarks at the committee meeting. “Most important for this committee, we need to ensure that we’re doing our due diligence before proceeding. One committee hearing is not enough to fully understand the consequences of this bill. It is a massive change in federal policy.”

That the vote went ahead over GOP objections is a sign that the effective marijuana roadblock on Capitol Hill has been lifted by the chamber’s new Democratic majority.

Under the approved bill, federal banking regulators would not be able to punish financial institutions just because they work with marijuana businesses that are legal under state or local laws, or those of an Indian tribe. Currently, while a growing number of banks are opening accounts for cannabis businesses as more state policies change, many remain reluctant to do so out of fear of violating federal money laundering or drug laws. As a result, many marijuana growers, processors and sellers are forced to operate on a cash-only basis, which can make them targets for robberies. 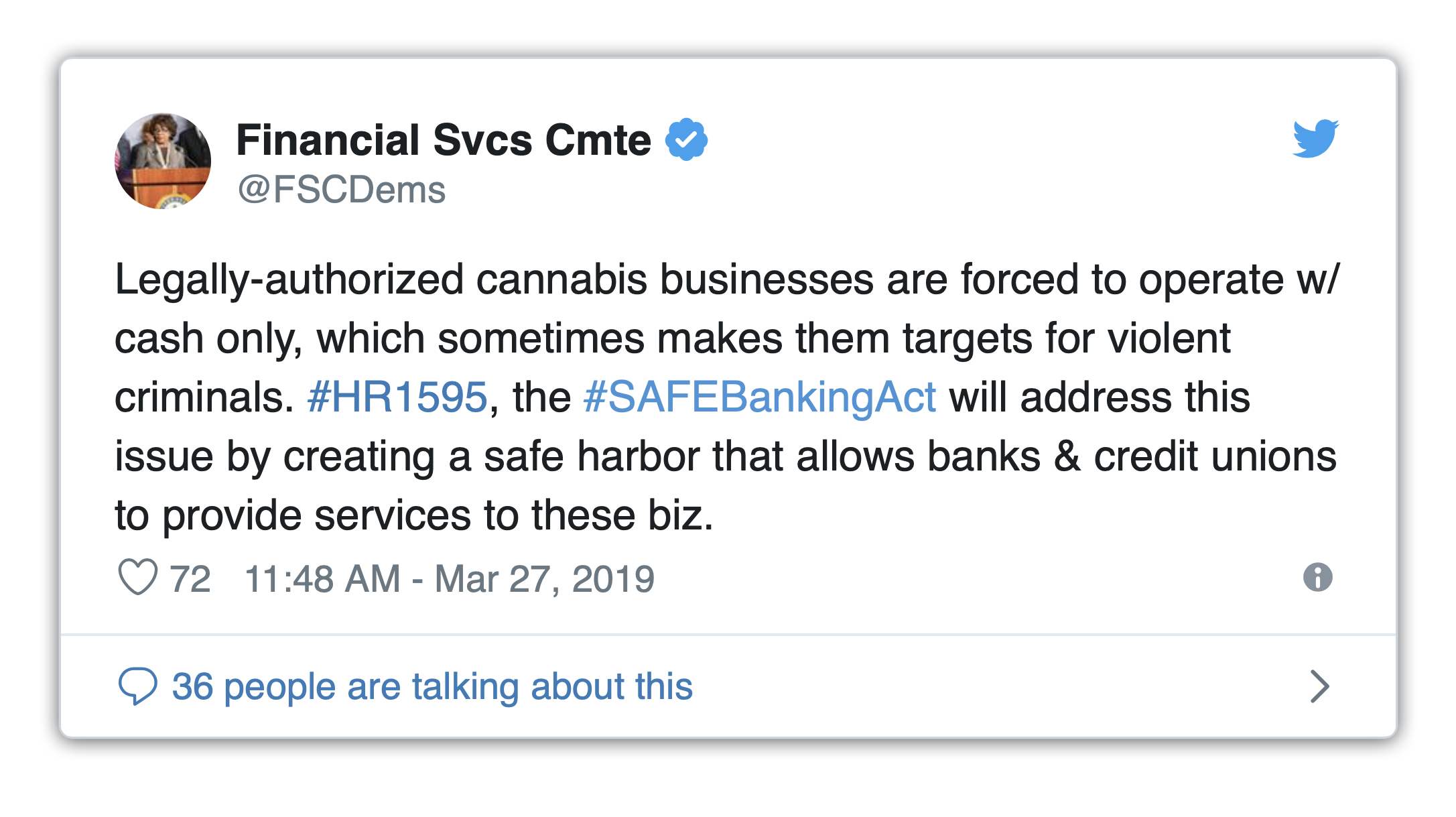 The legislation approved by the committee, the Secure And Fair Enforcement (SAFE) Banking Act, currently has 152 cosponsors—more than a third of the entire House, which is far more support than any previous standalone cannabis bill has earned. Twelve Republicans have cosponsored the legislation.

The SAFE Banking Act’s approval by the financial services panel is only the third time in history that a standalone marijuana reform bill has cleared a congressional committee. Last year, other committees voted to advance legislation encouraging the Department of Veterans Affairs to study medical cannabis and to require the Department of Justice to license additional growers of marijuana for research, but those proposals never made it to the House floor for action.

“It is our job to address this and no longer ignore it. I have brought this legislation up for six years,” Rep. Ed Perlmutter (D-CO), the SAFE Banking Act’s lead sponsor, said prior to the vote. “The people of this country sort of took it into their own hands, state by state, to pass initiative for medical marijuana or for cannabis oil or fully legal.”

Prior to voting to advance the bill to the House floor, the committee took action on a number of proposed changes to the legislation.

Perlmutter put forth an amendment to his own bill, which was adopted via a voice vote. In addition to clarifying the definition of the financial services that are covered by the bill and specifying that its provisions would protect Federal Reserve banks, new additions would require the federal government to study diversity and inclusion in the marijuana industry—a key concern of legalization advocates seeking to undo the damage of the war on drugs, which has been waged in a racially disproportionate manner.

In addition, the amended bill directs that the Government Accountability Office to conduct a study “on the barriers to marketplace entry, including in the licensing process, and the access to financial services for potential and existing minority-owned and women-owned cannabis-related legitimate businesses.”

Also during the committee markup, Rep. Katie Porter (D-CA) moved a separate amendment that would extend protections to so-called “de novo” banking institutions that are seeking charters or master accounts from a Federal Reserve bank. It was adopted via a voice vote. 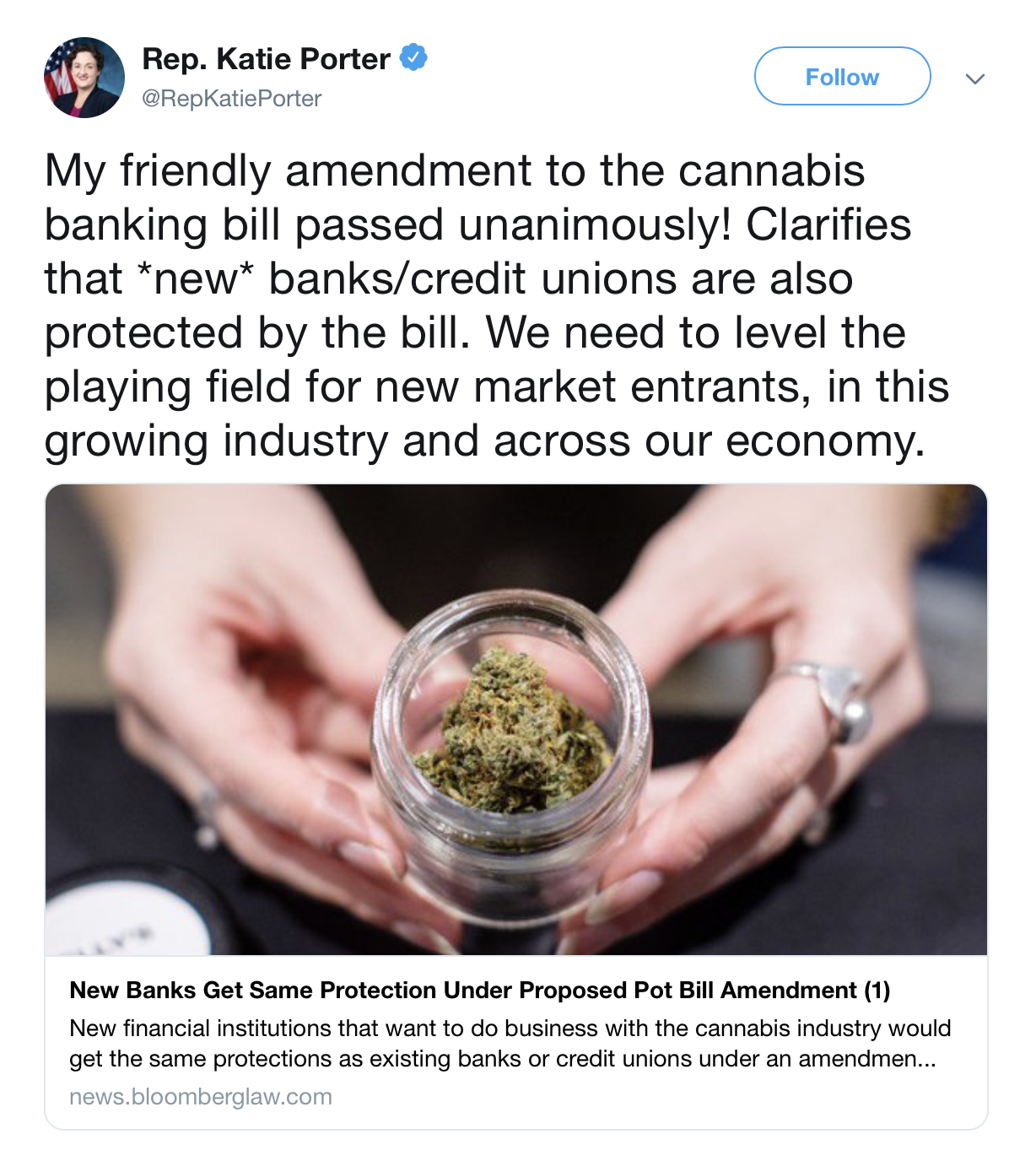 Rep. Steve Stivers (R-OH), one of the bill’s lead Republican cosponsors, filed an amendment expanding the legislation’s protections to insurance companies. It too was passed in a voice vote.

An amendment from Rep. Scott Tipton (R-CO) directs the Government Accountability Office to study previous reports that banks are required to file on their marijuana business customers to understand how effective they are in identifying bad actors. It was supported by the bill’s sponsors and approved on a voice vote. Tipton filed an another amendment aimed at making sure drug cartels and organized crime networks aren’t able to benefit from the bill’s provisions, but he withdrew it instead of forcing a vote.

Rep. Bill Huizenga (R-MI) moved to delay the bill’s effective date until marijuana is federally descheduled, but withdrew the amendment rather than force a vote.

Rep. Blaine Luetkemeyer (R-MO) sought to attach an amendment that would add “legal entities operating in accordance with federal law” to those covered by the bill. In introducing the measure, he made reference to prior federal investigations of banks working with firearms dealers and payday lenders. It was ruled non-germane, however.

Rep. Andy Barr (R-KY) filed an amendment that would have delayed the bill’s enactment until the Treasury secretary certifies it wouldn’t leave any financial institution more susceptible to illicit financial activity and money laundering, and that it doesn’t inhibit their ability to comply with federal regulations. It was defeated in a voice vote and then again in roll call vote by a margin of 33 to 27.

Another Barr amendment would have restricted the bill’s reach to only protect hemp businesses instead of those that deal with marijuana. It also lost on both a voice vote and a recorded vote. The latter went down 42 to 18.

An amendment from Rep. John Rose (R-TN) would have required banks to attest that they have internal controls ensuring that no funds have been deposited in their institutions that are associated with illegal organizations. It too was rejected in voice and roll call votes, with the latter tallying 33 to 27.

A second Huizenga amendment would have postponed enactment until federal financial regulators are able to issue guidance to banks. It was rejected with a voice vote, and a roll call was requested, which came out 35 against to 25 for.

Rep. Sean Duffy (R-WI) offered an amendment to withdraw the bill’s protections from banks that serve marijuana businesses located within 1,000 feet of schools, youth centers, public parks, child care facilities, public housing, civic centers or designated drug-free zones. It was rejected via a voice vote, and then in a roll call vote by a margin of 34 to 26.

During the broader debate on the bill, Rep. Denny Heck (D-WA), who along with Perlmutter is a leading sponsor of the proposal, spoke about a Colorado marijuana dispensary security guard who was killed during an attempted robbery as an example of the public safety harms of blocking banking access. He added that allowing cannabis industry operators to store their profits in regulated financial institutions would “enhance supervision and audibility of marijuana businesses.”

Banking Is Just The First Step For Federal Marijuana Reform

The banking legislation, which was the subject of a separate lengthy committee hearing last month, is seen by advocates as just the first step in an ambitious cannabis reform agenda they want the Democratic House to pass this year. Several more far-reaching bills to change marijuana’s legal status so that states can implement their own policies without the looming threat of federal interference have not yet been scheduled for hearings. Other pending proposals seek to address medical cannabis access by military veterans, the removal of roadblocks to research and tax rates for marijuana firms.

“Congress must take the long view that all these efforts—and I will work to ensure that when it comes to passing [the banking bill] that the House does not take a ‘one and done’ approach but that we will also comprehensively work, especially with our colleagues on the Judiciary Committee, on a series of marijuana related reforms,” Waters, the Financial Services Committee chair, said prior to the vote. Rep. Nydia Velazquez (D-NY) said at the Wednesday meeting that she will be exploring ways to expand credit opportunities for marijuana businesses, particularly those owned by women and minorities, in her role as chair of the House Small Business Committee.

Late last year, Rep. Earl Blumenauer (D-OR) authored a “blueprint” memo that lays out a step-by-step process Democratic leaders could take to federally legalize marijuana by the end of 2019. Passing a banking bill is a key part of his plan.

“This is a historic and critical step forward for the nation’s burgeoning cannabis industry. Lawmakers seem to recognize the urgency and public safety implications of ensuring cannabis businesses can access banking services,” Steve Hawkins, executive director of the Marijuana Policy Project, said in a press release. “Regardless of where members stand on legalization, they can agree that it is in the public interest to make banking available to cannabis businesses in states where it is legal.”

“This is a positive step forward to address an untenable tension between state-legal cannabis marketplaces and federal marijuana prohibition,” he said. “Ultimately, the banking issue is just one symptom of the toxic and cruel policy of federal marijuana criminalization. In order to truly bring the vibrant marijuana economy out of the shadows, actions need to be taken by Congress to end federal prohibition and the discrimination that comes with this failed policy.”

Sens. Jeff Merkley (D-OR) and Cory Gardner (R-CO) are expected to file companion legislation on access to financial services for marijuana businesses in the Senate soon. A prior bill during the last Congress garnered 20 cosponsors in the chamber but did not receive a hearing or vote. 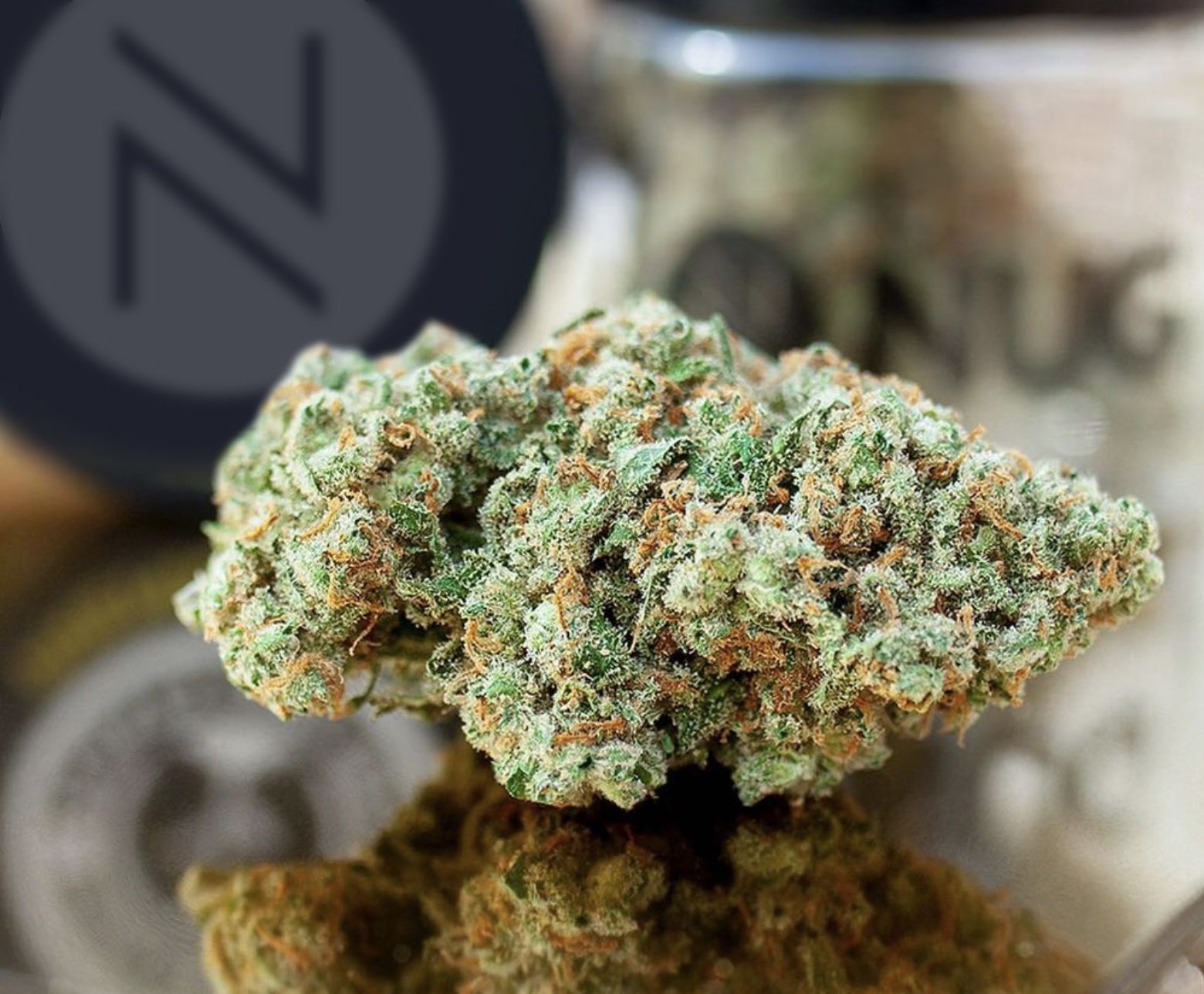 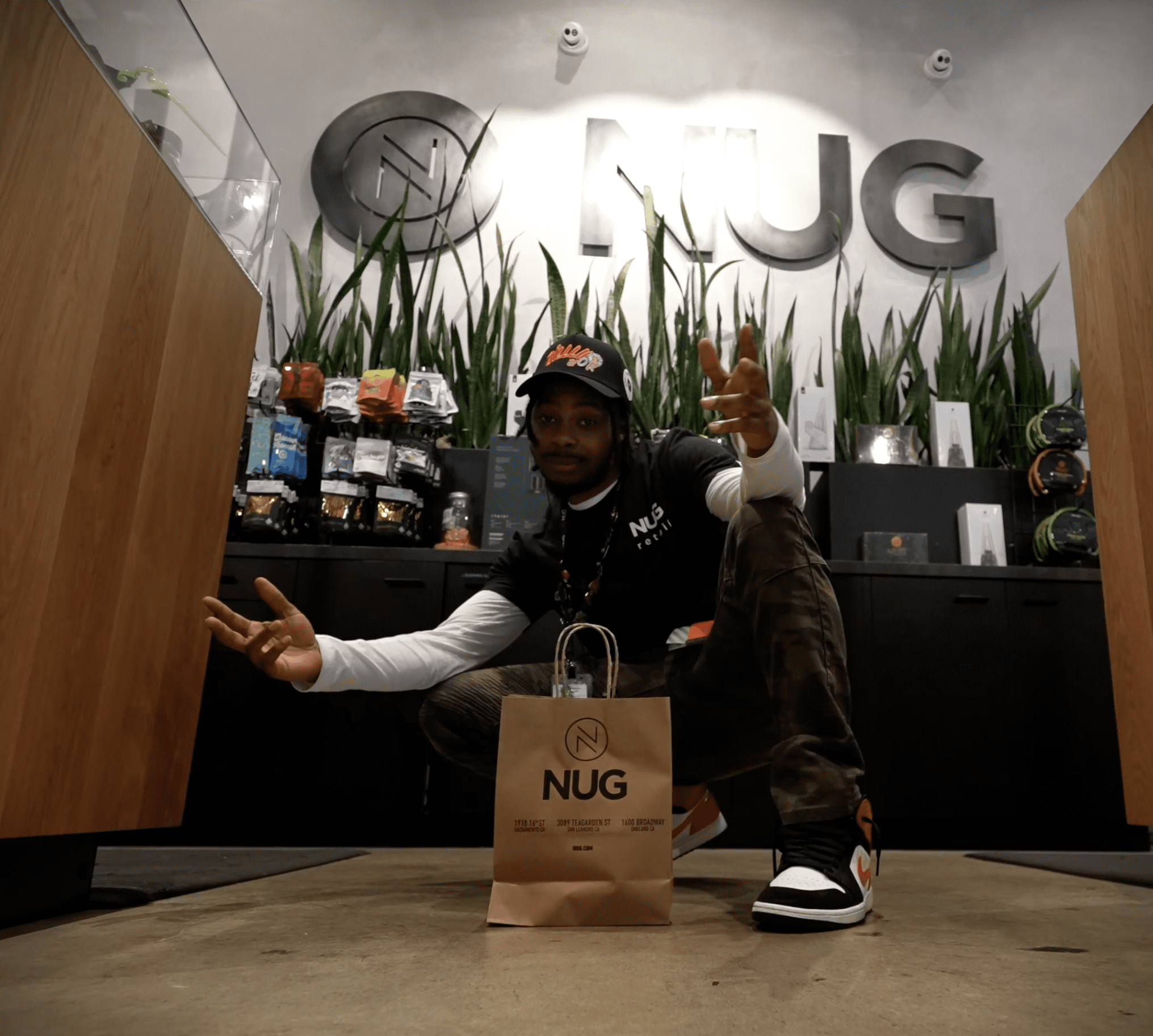 PrevPreviousFrom Seed to Sale to Retail: NUG Opens Flagship Shop in Sacramento
NextNUG Retail Sacramento on FOX 40 SacramentoNext
★★★★★
Probably one of the best cannabis shops in the east bay. The store is very modern inside with a wide variety of options.